First thing in the morning I get De Telegraaf from the dealer. Then I enter a shop that I think is a cafe.  I would like to enjoy my coffee while I was reading a newspaper. My eyes are looking for the sports page. When I don’t understand anything from Dutch with plenty of j, I’m asking to the waiter with a thought that I’ll stoop on my breakfast while I’m drinking coffee. “can i have a cake?” I say in a polite manner. I eat cake, drink coffee. After breakfast, I smoke the pleasure cigarette. This tobacco is very hard. This is worse than Turkish tobacco. I’m barely finishing a cigarette. I’m turning to the newspaper again. In the headline, something like “tijger ontsnapt uit de dierentuin” * is on the bottom, a big picture of a tiger. “That’s Dutch!” smiling, “Add j to the word Tiger! Although i love tigers, i don’t take the news seriously. As usual it must be news about new born tiger at the zoo. “Oh, those Europeans. They can even bring the news of a newborn tiger to the headline. ”

Wandering the streets. I’ve been hungry for half an hour. I am feeling sleepy. I’m entering Voldelpark. Go, go, go. A huge forest in the city. There’s nobody else but me. I’m taking a half-hour nap. When I open my eyes I hear a rustling in the bushes. Rustling turns into wheezing. When you caress your cat’s neck, multiply that sound by hundred. However, the process of multiplying by the auditory face is repeated visually. I have a huge house cat in front of me. No, no, that can’t be a fattened house cat. This is straight lynx. But as the feline approaches me slowly, I face the terrible truth. This is the most evil, the most ominous and the most beautiful of predators. Panthera tigris! Holy tiger! I’m not slapping myself because I’m in a dream. I’m not rubbing my eyes and biting my lips. Because I’m sure I’m in a dream. A tiger approaching me in the heart of Europe. When you wake up in the middle of a beautiful dream, you close your eyes again and try to fill the rest of your dream with your mind. I’m trying the same way.
Even though I’m hungry, I have five kilos of concrete in my head. I’m sure I’Il fall asleep quickly. I dream of the tiger approaching me. I’m in the Indian jungles instead of Voldelpark. At that moment I feel a wetness in my face. In my wonderful dream, I wake up again. When I open my eyes, I have to rub my eyes like in American movies. A perfect Bengal Tiger with all its majesty. What a beauty! Orange streaks that cut vertically black feathers, white feathers soaring through the cheeks. What about those big, honey-colored eyes? Even though I’m  normally a coward, but now i am in unnecessary relax. I think it must have been the effect of Turkish tobacco. This unnecessary relax turns into courage with the stupidity of sleepy mood. I love tiger like I love my cat at home. I’m scratching his neck and massaging the ear. I knead his neck like a dough. After these actions, the tiger loosens up just as my cat does. He’s lying sideways. I’m caressing his white belly. When I see your fluffy feathers, I put my head on his belly and sleep again. This time my brain is empty. I sleep for hours without dreaming. Deep inside, the police siren interferes in my ear, and then my head bumps into the ground. I wake up when I move from the soft body of the tiger to the wet and hard ground of the grass. The sound of the sirens is increasing. I open my eyes. There’s no tiger, no cat. Except for the ducks floating on the lake, the only living, loud Dutch siren comes out of a noisy siren. And they’re running to my side. My misdeeds in Amsterdam pass before my eyes like a movie. I got on the subway for free! I wandered the Red Light longer than necessary (which is not even to blame), threw bottles in the paper trash bin, paper in the trash bin. But none of this is worth the fuss. At least in Turkey. I can think of the man in Canada who was sentenced to imprisonment for not sweeping the snow in his garden. I mean, I am doomed. I am brunette. I am Muslim (on paper). Was I going to experience the Dutch version of Midnight Express? What was this cop running over me? All my sleep, my looseness, smoke and fly away. The police are tangent past me and dive into the forest. The gunfire and shouting that exploded in the forest from now on doesn’t interest me a bit. I tell myself I’m hungry like a tiger. Tiger! I say again. I should eat Indian or Southeast Asian food in honor of today. 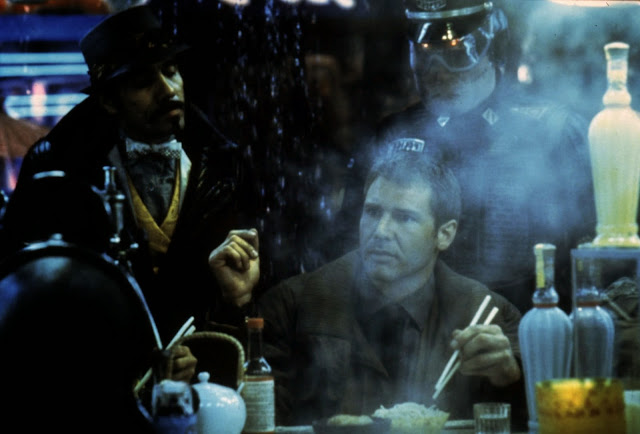 My direction concept is upset. I walk completely with my instincts. I smell, I listen, I watch. For some reason, my instincts are taking me to the heart of Red Light. I’m on Zeedijk street. We’re in Little Saigon, Amsterdam’s Little China. Chinese, Vietnamese, Indian, Japanese, Malaysian restaurants. It’s like we’re on the Blade Runner movie set. There’s no smoke, no grizzling, no exotic smells. I won’t pinch myself if Rick Deckard passes me with his brown topcoat. After all, man in the middle of Europe kissed the tiger.
On the right, I’m entering the Thai restaurant called Bird. As soon as I come in, the smoke from the grill hits me in the face. I’m ordering the soup with mushroom fish called Tom yam pla. Plenty of coriander. It’s good for my cold bones because I lie on the grass. Then I order  spring rolls with vegetables. Even though I could not get close to what I had eaten at the Malaysian restaurant the day before, I still swallow it. At least it’s much cheaper. The star of the day is roasted chicken noodles with tofu. The servings were plentiful, even at half the price of mediocre Thai restaurant in the city center i ate before. Chang’s Thai beer comes with an elephant theme logo. I raise my head. The video of the tiger, which ambushes on a typical Amsterdam bridge, plays on  television hanging up the wall. The two-second image is slowed down and extinguished. The rest of my mind comes back to me. Isn’t that the tiger I saw vaguely in the park? I watch the television in the bar as an American criminal who saw himself on television and pay my head forward. I’m erecting my coat like Erik Cantona to avoid recognition. As I run out of the restaurant, I see Little Saigon on a sparkling sign. 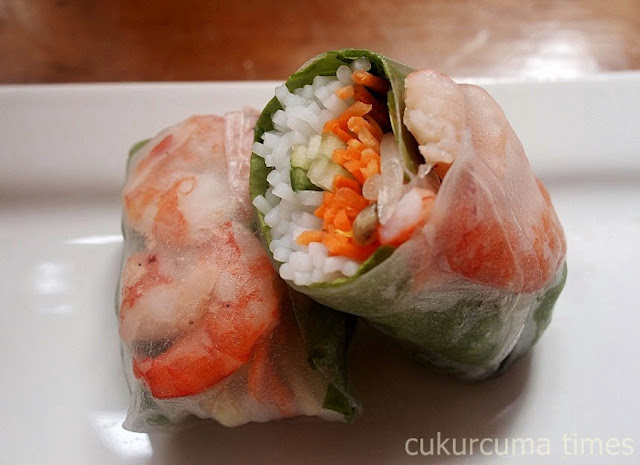 I’m going in. I’m in a hurry for no reason. “What can you do the fastest?” I ask the waiter as an American detective. Vietnamese waiter showing a photo of vegetables filled with big bread, “Banh Mi!” he answers. While waiting, I’m interested in fresh spring roles prepared on the counter. Rice paper wrapped noodles, shrimp and various greens. I want a portion.  I’m consuming them in thirty seconds. The cook at the back is preparing my banh mi. Isn’t that one of Bourdain’s sandwiches in Vietnam? The symbol of French colonialism is the compressed Vietnamese cuisine between the baguette bread. Steak cooked in ginger sauce, coriander, lemongrass, (I love it so much that I eat chocolate with lemon in the Puccini the next day. And I find the combination of chocolate lemonade surprisingly successful) and pickled radishes and carrots. The result will be exquisite. I say to the waiter. I am in a hurry. 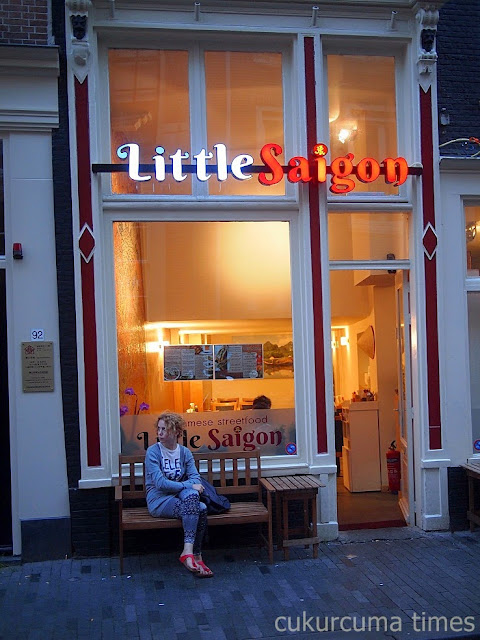 I see the tiger floating on the Amsterdam canals on the old fashioned television (again?). Then I pay the bill with panic as if it were a crime. I take the sandwich wrapped in aluminum foil and leave the shop. I run along Red Light between neon lights and far east food smoke. I hit the drunken Englishmen and move forward. I feel like the android that escaped Deckard. I’m going to a park again. This time it’s dark. Opening my sandwich. The smell of lemongrass and steak comes to my nose. I’m taking a big bite. I turn crazy. I shut my eyes. The feeling of concrete in my head still continues. I open my eyes again when the crickets cut off their voices. In the pitch dark two bright eyes are looking towards me. A deep growling is coming. That’s the same wheezing I heard at Voldelpark this morning. I’m picking up the steaks in Bahn mi. I’m heading east to the dark eyes. I’m stretching my hand towards the growl. When I was little, I felt the same itch when I gave horses sugar cubes. The creature in front of me licks the sauce of moist Vietnamese steak with its tongue like sandpaper. Then he swallows it all quickly. Stroking his head. I scratch his ears. His wheezing is growing. The tractor resembles the sound. That’s ten minutes. The environment is pitch dark. No sign of the police sirens. Creature is walking away softly and disappearing. I’m lying on the grass with the exhaustion of a long day. Crickets are starting to sing again. I sleep for hours like a log because of the lullaby effect created by this sound. 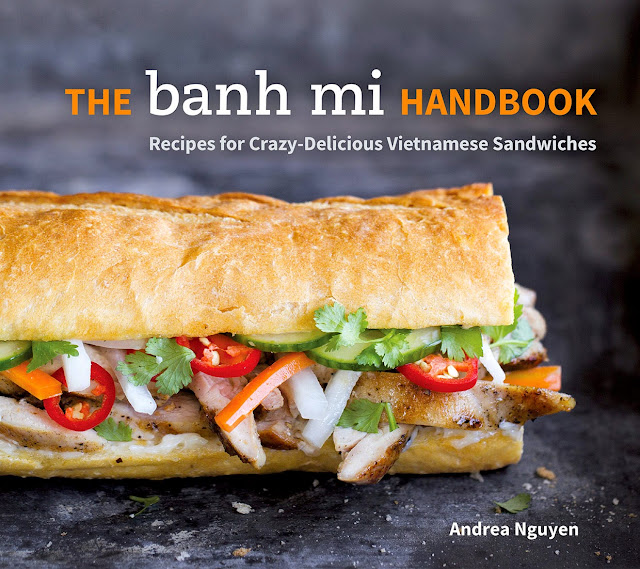 P.S: I entered to a bookstore I saw on the way the next day. In the head corner of the bookstore, I came across a book called Bahn Mi Handbook. After yesterday’s scrumptious sandwich, I bought it without thinking. The streets of Vietnam are sold not only with steak but with bacon, liver paste, chicken or vegetarian. Here in this book you can see all the banh mi variety with the detailed recipe.

*Tiger escaped from the zoo.